Decision-Making has been one of my areas of expertise for more than thirty years now. So, as you can gather, my judgments about the literature on this topic are based on a close familiarity with a significant number of publications in this field. If you ask me, therefore, to give you a summary of the recent trends in the area of Decision-Making, I would have to tell you that, to my mind, one of the most disturbing trends in this literature is the unfortunate tendency to engage in empty rhetoric and spin. This, I fear, is particularly evident in the more demanding area of Decision-Making under Severe Uncertainty, where the fundamental difficulties presented by this subject seem to open the floodgates to hollow and irresponsible babble.

Of course, given the pressures that academics are subject to these days (publish or perish, and bring in research $$$$$$$), it would be naive not to expect a certain amount of spin in publications. But, ... at the same time one expects some substance behind the spin. The trouble is, however, that all too often, spin has the upper hand.

Of course, this phenomenon is not unique to the discipline of Decision-Making. It is so widespread that it has provoked comment by others.

For instance, consider the opening and closing paragraphs of an interesting 2002 paper entitled Hype and Spin in the NHS dealing with Public Health (external link to NHS is mine):

PEOPLE increasingly expect hype and spin to be a feature of almost all the publicly available information generated by government, corporations, and institutions in general — and the NHS is fully implicated in this phenomenon. The result is that, despite the unprecedented volume and accessibility of information, an understanding of the realities of our society seems as remote as ever it was. Propaganda and factual information are presented in an identical fashion, and only a trained economist can tell whether the latest 'increase' in NHS funding is a genuine injection of resources or merely an example of creative accounting.

Peter Andras and Bruce Charlton
The British Journal of General Practice
52(479), 2002 (p. 520)
In the end, if attempted reforms continue to fall short, the unified structure of the NHS will presumably break-up in favour of a variety of smaller, simpler and more trustworthy alternative health care systems. Hype and spin are seductive short-term solutions, but will ultimately prove fatal to institutions that rely on public confidence.

My point is then that in many publications, sometimes in an entire literature on a specific topic, the amount and level of spin are such that, for the sake of science, this fact must be exposed to full view. The objective of this Web site is to do precisely this: to call a spade a spade. That is, my objective here is to show empty rhetoric and spin for what they are, and to call attention to the pitfalls that they can lead to.

This site aspires to be spin free. So, should you find any trace of it here, do not hesitate to contact me about it, and I promise to look at any item you contest carefully and dispassionately.

The Natural Laws of Operations Analysis

The following practical Laws are perhaps more relevant today than they were at the time of their publication some thirty years ago. They clearly allude to the kind of spin that one has to contend with in this business.

As suggested by this list, the whole trouble with spin and empty rhetoric is that — through the use of prolix, bombastic language and discourse — they are piled on as a substitute for substance.

So, you'd better develop some basic skills to enable you to identify spin and empty rhetoric for what they are. You may want to begin by giving some thought to these rules namely to the reality they allude to.

I shall not elaborate further on this issue, except to point out that much of my Info-Gap Campaign involves the exposure of spin for what it is. So, as my experience has shown, calling the bluff on empty rhetoric can be a satisfying adventure.

Note that I use the terms rhetoric and spin more or less in accordance with the following definitions (my usage is underlined):

The following example illustrates rhetoric and spin in action.

In 2007 I advised users/promoters of Info-Gap decision theory that not only is Info-Gap's robustness model neither new nor radically "different" from classical decision theoretic models -- as repeatedly claimed in the Info-Gap literature -- but, that it is in fact a simple instance of Wald's famous Maximin model (circa 1940).

To substantiate this claim, I provided a detailed proof.

For our limited purposes here, it will be convenient to summarize this result as follows:

Proof of the Maximin Theorem:

Note that the Maximin Theorem is instructive: it sets out a simple recipe for constructing that instance of the generic Maximin model that represents Info-Gap's robustness model.

No amount of fancy rhetoric or spin can change this bottom line.

So far so good.

Yet, this does not deter Ben-Haim — the Founder of Info-Gap decision theory — from continuing to maintain that Info-Gap's robustness model is not a Maximin model. The fact that to support this indefensible claim empty rhetoric and spin are taken to unprecedented heights, even by Info-Gap standards, amply illustrates my point that in certain areas, sometimes entire literatures, spin and empty rhetoric are the be-all and end-all.

To illustrate, consider this dissertation. Keep in mind that it makes no mention of the Maximin Theorem much less does it attempt to formally refute its validity:

We take a brief intermezzo to compare the robust satisficing strategy with a class of alternatives. The term 'min-max', 'robust control' and 'worst-case' refer to a collection of decision strategies which attempt to ameliorate a maximally adverse outcome. This can of course be formulated in a variety of ways. In one way or another, whether explicitly or implicitly, a greatest level of uncertainty or a worst possible outcome is posited. Then a strategy is sought which maximally diminishes the impact of this outcome.

First of all, if a worst case or maximal uncertainty is unknown, then the min-max strategy cannot be implemented. That is, the min-max approach requires a specific piece of knowledge about the real world: "What is the greatest possible error of the analyst's model?". This is an ontological question: relating to the state of the real world. In contrast, the robust-satisficing strategy does not require knowledge of the greatest possible error of the analyst's model. The robust-satisficing strategy centers on the vulnerability of the analyst's knowledge by asking: "How wrong can the analyst be, and the decision still yields acceptable outcomes?" The answer to this question reveals nothing about how wrong the analyst in fact is. The answer to this question is the info-gap robustness function, while the true maximal error may or may not exceed the info-gap robust satisficing. This is an epistemic question, relating to the analyst's knowledge, positing nothing about how good that knowledge actually is. The epistemic question relates to the analyst's knowledge, while the ontological question relates to the relation between that knowledge and the state of the world. In summary, knowledge of a worst case is necessary for the min-max approach, but not necessary for the robust-satisficing approach.

The second consideration is that the min-max approaches depend on what tends to be the least reliable part of our knowledge about the uncertainty. Under Knightian uncertainty we do not know the probability distribution of the uncertain entities. We may be unsure what are typical occurrences, and the systematics of extreme events are even less clear. Nonetheless the min-max decision hinges on ameliorating what is supposed to be a worst case. This supposition may be substantially wrong, so the min-max strategy may be mis-directed.

A third point of comparison is that min-max aims to ameliorate a worst case, without worrying about whether an adequate or required outcome is achieved. This strategy is motivated by severe uncertainty which suggests that catastrophic outcomes are possible, in conjunction with a precautionary attitude which stresses preventing disaster. The robust-satisficing strategy acknowledges unbounded uncertainty, but also incorporates the outcome requirements of the analyst. The choice between the two strategies — min-max and robust-satisficing — hinges on the priorities and preferences of the analyst.

The fourth distinction between the min-max and robust-satisficing approaches is that they need not lead to the same decision, even starting with the same information.

The conceptual and technical mistakes that led Ben-Haim astray on this matter are discussed in detail in the article Anatomy of a Misguided Maximin formulation of Info-Gap's Robustness Model and in FAQ # 20, FAQ # 58, and FAQ # 59.

For the record, I should point out, again, that Ben-Haim is fully aware of the existence of this theorem, what is more, that he does not dispute its validity. The situation is similar with respect to the Invariance Theorem.

It is therefore most regrettable, indeed inexcusable, that Ben-Haim has chosen to waltz around these theorems by means of spurious explanations to thereby extend already existing errors rather than admit to mistakes.

It will be interesting to see how long will Ben-Haim pursue this deliberate strategy of avoiding to deal with theorems that invalidate his repeated claims and pronouncements regarding Info-Gap's unique role and place in decision theory.

So, if empty rhetoric and spin are used in scholarly publications to sustain obviously erroneous theories why shouldn't they be used in publications of other institutions not devoted to the advancement of knowledge?! 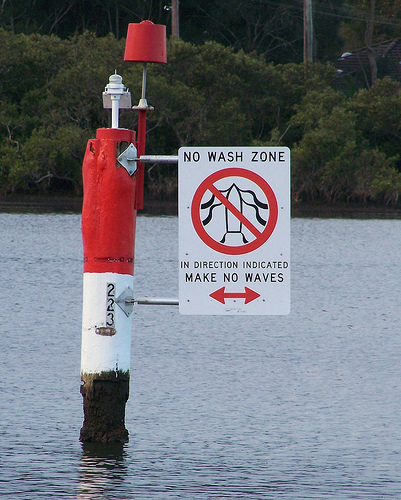 To be sure, there are many situations where it is not a good idea to make waves lest one rock the boat.

But there are situations where making waves and rocking the boat is an imperative.

The difficulty of course is that deciding when and how to make waves is not easy, as one's job/career may be on the line. Furthermore, making waves need not necessarily yield the results one was aiming to produce.

So: should you or shouldn't you rock the boat with regard to a specific issue?

The reason that I raise this issue on a page whose objective is to expose the role of empty rhetoric and spin in sustaining unsubstantiated, even erroneous, theses is obvious.

One of the reasons that empty rhetoric and spin triumph is precisely that: the reluctance of academics to make waves lest they rock the boat. The idea here is simple:

Don't rock my boat, and I won't rock yours!

Needless to say, rocking the boat one shares with others is regarded a particularly naughty thing to do. So, what is the wonder that spin and empty rhetoric are rife in situation where the boat is crowded?!

It is particularly unfortunate that this phenomenon now affects academia for it has immediate repercussions for academic freedom which requires academics to openly and vehemently come out against erroneous theories for sake of the advancement of knowledge.

For how can knowledge be advanced if we allow spin and empty rhetoric to influence scholarly/academic discourse?

I refer you to the website of the USA National Weather Service Weather Forecast Office for an interesting discussion on FOG. Let me just mention the types of fogs that they discuss and show you their beautiful pictures:

There is also another type of fog that has very little to do with the weather.

According to the The American Heritage Dictionary of the English Language, one of the meanings of the word fog is

Something that obscures or conceals; a haze

So fog of this type often explains why theories that are obviously flawed attract many followers, including senior academics, and spread over continents; and why articles based on such theories are accepted for publication in peer-reviewed journals.

What I need here is a nice picture showing an example of an Academic Fog. Any suggestion?