The Power of the (Peer-Reviewed) Word

For some reason, my presentation On The Power of the (Peer-Reviewed) Word, at the ASOR Recent Advances in Operations Research 2011 meeting, which I posted on this website, has attracted an unusually large number of visitors. 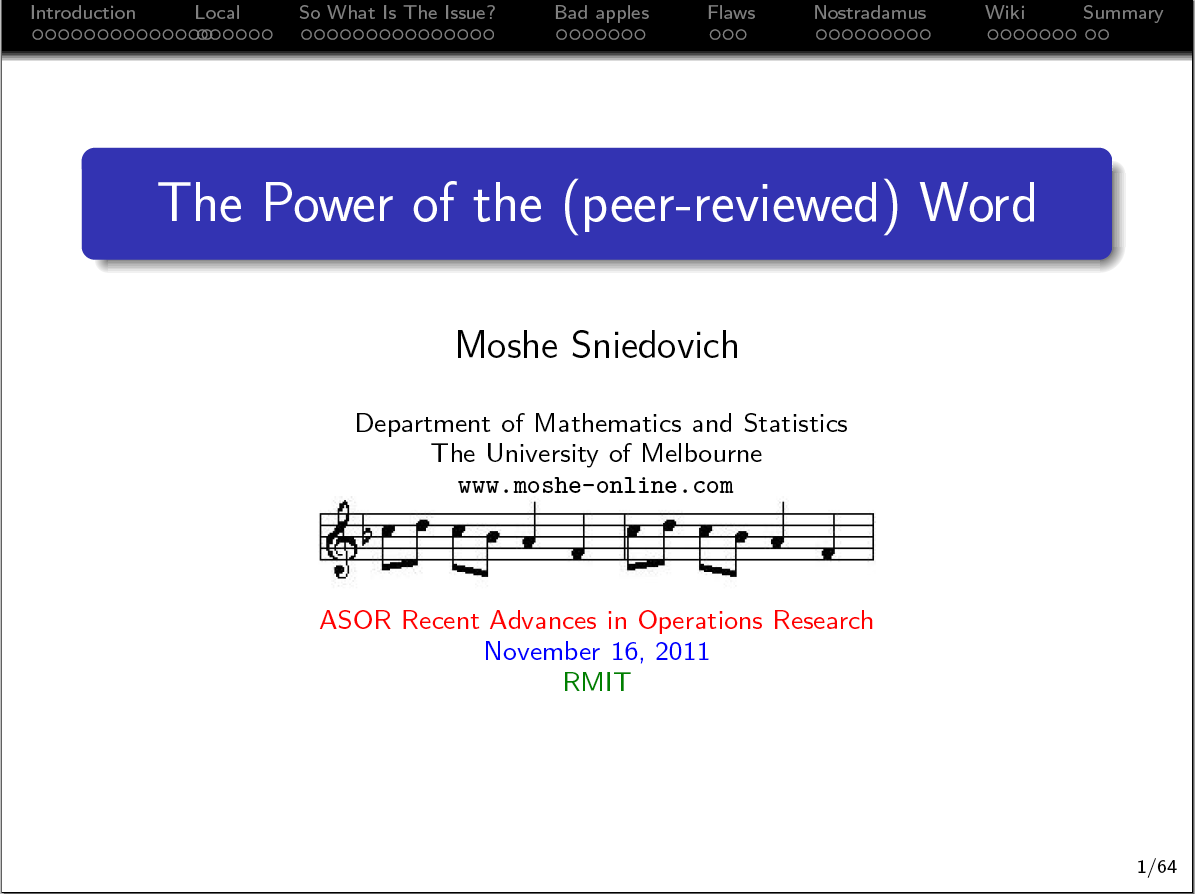 In view of this extraordinary response, I decided to launch a blog on this clearly intriguing topic.

However, as this may take some time to complete, for the time being, visitors will have to make do with this rather lean page. To download a copy of the presentation, simply click here, or on the picture on the first slide of the presentation that will display on the right hand side of the page. This is a 3MB PDF file.

I want to point out to all those visitors to my website, who did not attend my presentation, that the material covered in this presentation will feature as a chapter in my next book: Fooled by Robustness: a Perspective from the Land of the Black Swan.

To give my discussion an Australian flavor I based it on the following quote. Take note that the Federal Government in question is the Australian Government, also known as the Commonwealth Government (emphasis added):

" ... Environmental decision science is young. Prior to AEDA there was no centre in which researchers and practitioners from all the relevant disciplines worked closely together to formulate and solve the pressing environmental problems of the day. The Federal government took a calculated risk investing in a multidisciplinary centre that was very different from traditional ecological science. And what has been the return on that investment? Quite a lot if you consider our achievements (many of which have been presented in Decision Point, see the next page for just a few examples). It's important to note that all of these outputs appeared in the peer-reviewed literature (including some of the top journals like Science and Nature). We often forget that the CERF program is a research program, albeit applied research, and research must eventually be subject to peer review to be credible. ..."

With this as background, the issue that I address in this presentation is the treatment of Type II errors , namely flawed publications that passed muster in the peer-review process. By this I mean "bad apples" that somehow managed to penetrate the defenses set up by the peer-review process, to find their way, as refereed articles, into peer-reviewed journals. See my compilation of review reports on an array of articles and books.

That this happens every so often is a fact. The trouble is, however, that most journals lack adequate procedures to deal with such cases. Thus:

"... Peer review failures occur when a peer-reviewed article contains obvious fundamental errors that undermine at least one of its main conclusions. Many journals have no procedure to deal with peer review failures beyond publishing letters to the editor. ..."

To make vivid the issue that I am raising here, let us consider a hypothetical case that is in fact based on a real-world situation. For the purposes of this discussion, it suffices to say that the journal in question is a reputable international journal in the area of risk analysis. The dates are fictitious.

Suppose that in March 2003 a peer-reviewed journal, call it XXXX YYYYYYY, accepted for publication an article proposing the use of a theory, call it TTT, to handle a large class of important risk analysis problems. Suppose next that in August 2005 the article was published in the journal. As a matter of fact, assume further that another 5 articles of this type (accepted at different dates) were published by the journal over a period of five years.

Now, suppose that in February 2006 it was established that TTT is a "bad apple" following which articles discussing and demonstrating the flaws in this theory were published in three peer-reviewed journals, refereed conference proceedings, research reports, and were posted on web pages.

If you are not involved in the Publish or Perish sector of the economy, you may not be aware that although cases such as this may not occur very frequently, they do occur from time to time.

The question therefore arising is this:

Whose responsibility is it to inform the readership of XXXX YYYYYYY that TTT is a "bad apple"?

Here are some plausible answers to this fundamental question:

I raise this question, and I propose a number of plausible answers to it, because, as indicated above, most journals lack suitable procedures to deal with "bad apples".

And to bring matters to a head, I want to point out that, this fact, is recognized for instance by Wikipedia which relies heavily on peer-reviewed publications for its content. Indeed, peer-reviewed articles are regarded by Wikipedia as reliable and verifiable sources.

Wikipedia's way of dealing with this issue is to invoke the "Majority Vote principle" ...

Wikipedia's reliance on the "Majority Vote principle", is embedded in its so called Neutral point of view (NPOV):

Neutrality requires that each article or other page in the mainspace fairly represents all significant viewpoints that have been published by reliable sources, in proportion to the prominence of each viewpoint. Giving due weight and avoiding giving undue weight means that articles should not give minority views as much of or as detailed a description as more widely held views. Generally, the views of tiny minorities should not be included at all. For example, the article on the Earth does not directly mention modern support for the Flat Earth concept, the view of a distinct minority; to do so would give "undue weight" to the Flat Earth belief.

So, as a result of Wikipedia's reliance on the "Majority Vote principle", the following situation may well occur. If theory TTT boasts 346 peer-reviewed articles as opposed to your say 2 articles showing conclusively (that is, proving formally and rigorously) that TTT is fundamentally flawed, then Wikipedia's policy may well hamper your ability to inform the readers that TTT is fundamentally flawed.

Happily, in some circles the "majority vote principle" is not taken at face value to serve as the decisive factor in matters of science. And so, although a person may prove to be a "lone voice" in a certain (scientific) discourse, debate, and so on, the factor deciding the merit of a case is the reasoning underpinning it. For:

To which I say: Viva Galileo!

The trouble is that the Editorial Boards of some peer-reviewed journals may not have among their ranks, even one single person whose humble reasoning can settle the issue. Worse, they may be reluctant to nominate such a person.


To complete the picture, suppose that the other two referees justify your criticism of the theory.

The question is then:

What can authors do about referees whose review reports are riddled with flaws and whose accusations (such as the above) stem from serious technical misconceptions they have about the subject matter?

I don't know about you, but ... I consider posting my response to the referee's accusations on my website, hoping that (sooner or later) the referee will get the message.

Until the envisioned new blog is ready, you may want to do one or more of the following:


I highly recommend the latter to persons who have never received an official rejection letter from a peer-reviewed journal.

Whatever you do, remember this:

The 26 soldiers referred to in the quote from Franklin are the 26 letters of the English alphabet and the "lead" a printing/writing device. Translating it to our time: with a word processor and a printer you can conquer the world!

In short: the word can conquer the world.

If your organization is promoting Info-Gap, I suggest that you invite me for a seminar at your place. I promise to deliver a lively, informative, entertaining and convincing presentation explaining why it is not a good idea to use — let alone promote — Info-Gap as a decision-making tool.

Here is a list of relevant lectures/seminars on this topic that I gave in the last two years.